After a more in-depth analysis of the iOS 8 and OS X Yosemite new features shown last monday during the WWDC14 conference, we have noticed there is a common denominator in several of their new technologies. Here we go:

Apple introduced with iOS 7 a pretty useful feature for iPhone users that allows them to setup an AppleTV using iPhone settings with only a touch (no actual touch is required). This works by using the bluetooth signals for detecting the approximate distance from one to the other, so they can exchange the necessary information for the setup.
Apple extends this functionality even further in iOS 8 by using the combination of "bluetooth signals for discovering, Wi-Fi ad-hoc network (p2p) to transmit data", providing iOS devices with the ability to transmit over AirPlay without the need of being under the same Wi-Fi network.

This extends the possibilities of iOS and OS X integration

. Users will be able to answer GSM calls from their computer, or continue the work started from one device to the other. This is also a proximity-aware feature which relies on Bluetooth for discovering, and probably on Wi-Fi for data transmission, just as the improved AirPlay setup described above.

AirDrop is a service, first seen on OS X Lion in 2011, that allows a device to send files to other ones directly, without being in the same network.

Incompatibility exists between iOS 7 and OS X AirDrop due to the differences between their implementations. On OS X Mavericks (and earlier), AirDrop is based on Wi-Fi only, whereas in iOS 7 utilizes both Bluetooth and Wi-Fi signals (again, bluetooth for discovering, Wi-Fi for data transfer).
With the introduction of OS X Yosemite, AirDrop will work the same way as it does in iOS, making it compatible between OS X and iOS. 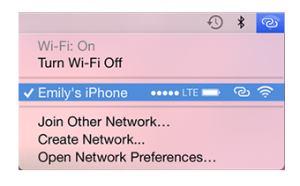 This is a quite handy feature for those who use their iPhone to share its GSM internet connection with an iPad or a Mac. This feature allows users to create an instant hotspot without the need of getting out the iPhone from their pocket; they will just need to look for the iPhone in the iPad/Mac settings, and select it to start sharing internet access.
At this point you probably know how this feature works, don't you? Exactly: By using bluetooth for discovering, and Wi-Fi for data transfer.

For Apple, bluetooth has been in the background since the original iPhone presentation in 2007. Suddenly they have combined it with other existing technologies to create a very interesting set of new features, however there is an important underlying message: Apple has decided to use bluetooth extensively for all their proximity-aware, and micro-location dependant technologies.